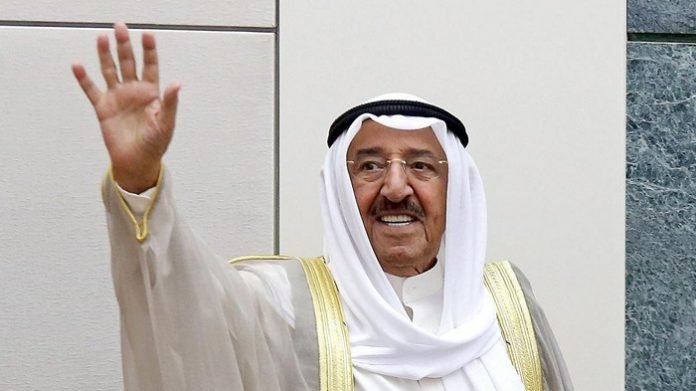 On 29 January, Kuwait marked with great festivities the 13th anniversary of the ascendency of His Highness the Amir Sheikh Sabah Al-Ahmad Al-Jaber Al-Sabah. On this day in 2006, the National Assembly unanimously proclaimed His Highness as the 15th Amir and ruler of Kuwait, amid huge popular support from people across the country.

Born on 16 June, 1929, as the fourth child of Sheikh Ahmad Al-Jaber Al-Sabah, His Highness’ early education were at Al-Mubarakiya School — the first formal education establishment set up in Kuwait, and named after former leader and amir Sheikh Mubarak Al-Sabah. He continued his education with private tutors and on becoming an young adult, entered into a life dedicated to the service of his beloved nation.

Sheikh Sabah’s foray into public service began in 1954 with his appointment as member of the Central Committee Municipality Council. He then went on to take up other administrative roles, as member of the Building and Construction Council; Chairman of the Social Affairs and Labour Authority in 1955, and member of the Higher Council of Country Affairs in 1956. In the same year he was appointed as Chairman of the Printing and Publishing Authority and would continue in that role till January 1962.

As head of the publications department in 1957, Sheikh Sabah demonstrated a commitment to reviving old books and manuscripts and tasked a committee with writing the first book detailing the history of Kuwait. Sheikh Sabah was also the guiding force behind Kuwait’s Publication Law that allowed Kuwaiti writers and poets the freedom to explore ideas and express views freely; the law was unique in a region not known to favor literary freedoms.

When the country gained its independence from Great Britain and the first cabinet was formed under Sheikh Abdullah Salim Al Sabah in 1962, the post of Minster of Information went to young Sheikh Sabah. The following year he was appointed as the country’s Foreign Minister; a role in which he would continue for the next 40 years, using his dynamic leadership to drive the country’s polices and positions on local, regional and international issues on the global stage.

In 1963, during the first year of Sheikh Sabah’s time in office as Foreign Minister, Kuwait was accepted as the 101st member of United Nations, and he attended the unfurling of Kuwait’s national flag at the United Nations Headquarters in New York. Throughout his diplomatic career that was marked by several accomplishments and successes, Sheikh Sabah earned the respect of his colleagues on the international arena and burnished his image as a skillful negotiator and peace maker, trusted and accepted by both sides in a conflict.

Sheikh Sabah also played a crucial role in unifying the Arabs every time there has been disagreements between them. He has worked tirelessly in cooperation with leaders of the Arab countries to realize historical Arab reconciliation by overcoming differences and emphasizing brotherly relations. His ability to reach amicable settlements and positive outcomes is also a reflection of the esteem and respect with which he is held by leaders in the region.

It was Sheikh Sabah who headed diplomatic talks in 1966, when Kuwait hosted the warring parties in the conflict between Egypt and Saudi Arabia over Yemen. In 1972, when relationship between South and North Yemen deteriorated and border clashes erupted, Sheikh Sabah was instrumental in bringing the two countries together and helping forge a peace agreement between them.

Sheikh Sabah also successfully mediated an agreement of diplomatic principles between Oman and South Yemen, which was followed by a joint announcement on the resumption of diplomatic relations in 1984. Throughout his tenure as foreign minister, Sheikh Sabah assumed a balanced foreign policy that enabled Kuwait to overcome some difficult periods such as during the Iraq-Iran War of 1980 and its repercussions on the internal and external security, and stability of his country.

In addition, over the years in his diplomatic career Sheikh Sabah developed strong and cordial relationship with countries around the world, particularly the five permanent members of the United Nations Security Council. Leveraging these strong ties, Sheikh Sabah was able to ensure that the United Nations Security Council passed resolution 678 on 29 November 1990, which called for the immediate and unconditional withdrawal of all Iraqi forces from Kuwait. The failure by the Iraqi forces to comply with this resolution led to the emergence of a 35-nation coalition that was mandated by the United Nations to help liberate Kuwait from the vicious Iraqi invasion.

During his tenure as prime minister, Sheikh Sabah concentrated on domestic issues with the same commitment and zeal that he had displayed earlier on the global stage. He adopted a comprehensive development-based vision, focused particularly on economic growth through support of the private sector and developing entrepreneurism among the youth.

Recognizing the slow shift of global economic activity from the West to Asia, Sheikh Sabah led a high-level business delegation to the capitals of China, Japan, South Korea and Singapore in 2004 to highlight the potential of Kuwait as an investment destination. The economic tour resulted in the signing of 10 mega deals and projects between Kuwait and the Asian countries.

In 2006, following the demise of former amir Sheikh Jaber Al-Sabah, the Parliament held a special session and passed a unanimous motion appointing Sheikh Sabah as 15th Amir and ruler of the State of Kuwait. Over the years, His Highness the Amir has followed the path of cautious reform and has been heedful to the needs of the people. In the past 13 years, the country has witnessed widespread developments, and reforms aimed at rejuvenating the private sector and promoting entrepreneurship among youth.

The Sabah Al-Ahmad Marine City, the first city to be fully-developed by the private sector in Kuwait; Jazeera Airways, the first non-government airline in the Middle East; and, the Sabah Al-Ahmad Natural Reserve, the largest and most biodiverse area in the country, are just some of the mega projects that saw fruition during the reign of Sheikh Sabah.

Under the guidance of the Amir of Kuwait, the latest five-year development plan (2015-2020) aims to transform the State of Kuwait into a financial and commercial center for the northern Gulf region. The Plan includes intended spending of US$116 billion on energy and infrastructure projects and strengthening of the role of the private sector. The State of Kuwait has also implemented reforms to allow 100 percent foreign ownership in most sectors of the economy, excluding oil and gas sectors, and is seeking to encourage foreign businesses into the country. Major industries were such investments are welcomed include real estate, shipping, construction, cement, water desalination, construction materials and financial services.

On the political front, His Highness the Amir has always urged unity among people. Following the June 2015 vicious terrorist attack on Al-Sadiq Mosque in Kuwait City, that saw the martyrdom of 26 people and injury to over 200 others, His Highness urged nationals to stand together in the face of challenges and threats. Shortly after the suicide attack, His Highness the Amir visited the location unannounced and unaccompanied by any formal entourage. At the bloodied site, he spoke emotionally in words reflecting his paternal care: “Those are my children”. Again, while leading thousands of Kuwaitis who came to attend the mass funerals for the victims, His Highness urged “the Kuwaiti family to stand together united through troubles and strife in tackling violence and fundamentalist rhetoric that aims to undermine the other.”

On the humanitarian side, His Highness has been a beacon of hope to people affected by natural and man-made disasters around the world. During the conference of the First Arab Summit for Economic and Social Development, which was convened in the State of Kuwait during the period 19 to 20 January 2009, the Amir of Kuwait launched an initiative for supporting and encouraging small and medium enterprises based on exploiting available local resources of goods and services with an estimated capital of $ 2 billion. The Amir of Kuwait ordered the provision of US$ 500 million to launch this development initiative.

Under the leadership of His Highness the Amir, Kuwait hosted three pledging conferences for Syria that brought together international governments and organizations. He co-chaired a similar event in London, in addition to attending another European Union-organized event in Brussels to help people affected by the ongoing Syrian crisis. The Kuwait-hosted donors conferences raised a total of US$7.5 billion from attending nations, while Kuwait handed out a total $1.6 billion across all five gatherings as support for the victims of the Syrian conflict. In February 2018, Kuwait also hosted a pledging conference dedicated to efforts aimed at rebuilding cities and towns in Iraq reclaimed from the so-called Islamic State group. Such humanitarian contributions have seen the State of Kuwait ranked, in 2014, as the top donor of international humanitarian assistance as a percentage (0.24 percent) of its gross national income.

The Amir of Kuwait has always positioned Kuwait at the heart of humanitarian work, raising the volume of aid and relief supplies provided to the countries hit by catastrophes and crises. Under the wise guidance of the Amir of Kuwait, the Kuwait Fund for Arab Economic Development has continued to provide financial and technical assistance to countries, institutions and corporates around the world, in addition to subscribing to the capital of regional and international development institutions. Led by the vision of the Amir of Kuwait, the Kuwait Fund assistances have benefitted over 100 countries around the world, and is a shining example of the State of Kuwait’s concern for humanity at large.

Long way to go before Kuwait roads made safe

Looking back at fond memories