Special assemblies were conducted over the week by the students on the theme “National Unity Day” in which they remembered all our national leaders. The students rendered a beautiful song “Aao Hum Sab Haath Milayein” and gave a presentation on the significance of being united and one.

Principal Mr. Rajesh Nair addressed the students and reminded that unity is the strength of our nation and emphasized that it’s their responsibility to keep our nation strong and united.

Videos on the life and mission on Shri Sardar Vallabhbhai Patel were shown to the students during the week. 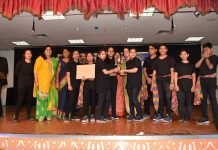