The Principal of Indian Community School, Kuwait (ICSK) Senior, Dr. V Binumon, Vice Principal, Susan Rajesh and Deputy Vice Principal Mini Shaji along with the entire crew of ICSK Senior, marked the 150th birth anniversary of the Father of the Nation, on 2 October, 2019 by unveiling a monumental statue of Gandhiji. The statue was unveiled by Mrs. Shehnaz Dalvi (Secretary of Staff Club) ICSK Senior.

The Principal, Dr. V Binumon and the Vice Principal  Susan Rajesh addressed the entire staff and students and shared their joy and adulation on this auspicious occasion.

Gandhiji imparted the lessons of hard work with truth and perseverance to achieve your goals as a nation and individual self. He believed in a nation based on equality, free of any disparities based on religion or caste. These teachings are just a few drops in the ocean of knowledge that Gandhiji had.

The Principal Dr. V Binumon gave a message to the ICSK family on the auspicious occasion about hardwork, integrity and determination.

ICSK Senior has always believed in the traditions and culture of their country and has worked to keep the ideals alive in the heart of the children.

The statue of Gandhiji was sculpted by Suraj, Art Teacher of ICSK Senior. A floral tribute was also paid to Gandhiji by Hamad Muneef (Inspector, Ministry of Education, Kuwait). 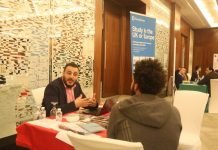