Indian Ambassador to Kuwait H.E. K. Jeeva Sagar urged members of the Indian community to attend and participate in the upcoming Pravasi Bhartiya Divas (PBD), which will be held in India in January 2019. The PBD is held once every two years to strengthen the engagement of the overseas Indian community with the Government of India and reconnect them with their roots.

Addressing an informal gathering with representatives of all registered Indian associations, principals of Indian schools in Kuwait and some prominent members of the community, the ambassador noted the importance and significance of attending the event and added, “by ensuring your presence at PBD, you are representing the whole region to which your association belongs.”

Ambassador Sagar spoke of the advantages of attending such a huge event where non resident Indians from all over the world converge to participate in various events under the umbrella of the government of India.

Three members from the Indian community were requested to address their fellow compatriots and share their personal experiences and knowledge of past events they attended. Rajpal Tyagi, Reaven D’Souza and Sanju Raj spoke on the great opportunities and experiences that attendees will have during their visit, including experiencing the Kumb Mela celebrations and the Grand Republic Day parade.

The 15th Pravasi Bharatiya Divas will be held at Varanasi in Uttar Pradesh from 21 to 23 January 2019. On the first day, the Youth PBD and Uttar Pradesh State PBD will be held, while on 22nd, the PBD Convention will be inaugurated by Prime Minister Narendra Modi, and on day 3, valedictory session and Pravasi Bharatiya Samman Awards will be given by the President of India. This year, two attractive aspects of the PBD convention are a visit to Kumbh Mela at Prayagraj in UP and the opportunity to witness the Republic Day Event at New Delhi.

The last date for registration to PBD 2019 is December 31, and online registration is available at the PBD official site http://www.pbdindia.gov.in 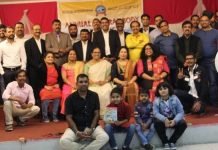 IMA Kuwait organizes ‘Seeartun Nabi (Peace be upon Him) Program’