Kuwait will mark the 29th anniversary of the first air strikes of operation ‘Desert Storm’ launched by international coalition forces to liberate Kuwait from the Iraqi Invasion on January 17.

Then US President George Bush made the decision to start the military operation on January 15, 1991, after a meeting with his senior national security advisers concluded that implementation of operation takes place on time, after the failure of all diplomatic means to persuade Iraq to withdraw troops. In the morning of January 17, after the end of the ultimatum set by the UN Security Council, air raids were launched, with the participation of 1,800 warplanes from the US, UK, Saudi and Kuwait.

The fighter jets took off from the Red Sea and Incirlik Air Base in Turkey, and other air bases in Saudi Arabia and Bahrain. In the first day, the raids lasted 240 intermittent minutes, in which 400 warplane participated. The coalition jets conducted 1,200 operations, including 302 by Saudi and Kuwaiti aircraft, destroying almost half of the Iraqi airpower. Various types of warplanes participated in this operation, under the guidance of AWACS aircraft. The US aircraft carriers fired 100 Tomahawk missiles against Iraqi targets in Iraq and Kuwait. Jaguar warplanes participated in a major role in directing the attacking planes and jamming the counter devices and radars. The F-117s warplanes had a primary role in first strike to destroy and bomb targets in Baghdad, and Iraqi air defense could not shoot down any of them.

On February 24, coalition forces entered at dawn into Kuwaiti and Iraqi territories. The ground forces were divided into three main groups: the first went to liberate Kuwait City, the second to surround the wing of the Iraqi Army west of Kuwait, while the third group was tasked with moving in the far west and entering South of Iraqi territory, to cut off all supplies to the army. On February 26, 1991, the Iraqi army withdrew from Kuwait after setting fire to Kuwait’s oil fields. President Bush announced on February 27 the liberation of Kuwait, 100 hours after the launch of the ground operations, saying his famous phrase ‘Kuwait today is free’. 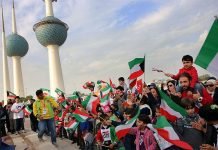