Kuwait U-19 cricket delegation, who qualified for the Asian Cricket Council U-19 Asia Cup, were honored and awarded a total of $8500 cash awards by the Kuwait Cricket (KC) Board President – Haider Farman at his Diwaniya. Russia banned from Olympics, World Cup and all major sporting events for four years by Wada 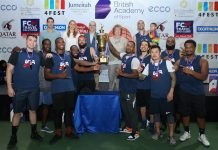