On its 20th Anniversary Tulukoota Kuwait (TKK) celebrated the true spirit of Tulunadu by hosting a grand Tuluparba celebration under the able leadership of the dynamic president Ramesh S. Bhandary on Friday, 25 October 2019 at American International School, Maidan Hawally, Kuwait.

The event started with a grand procession conceptualized by Suresh Salian. People belonging to various communities and age group took part in it. A blend of Tulunadu festival zeal and passion converted the procession into a kaleidoscope of colors and gaiety. Children carrying flags depicting the different associations in Kuwait and ladies carrying lavishly decorated trays with objects displaying rich Tulunadu culture was the cynosure of all eyes. Tuluparba ‘Tuluvara mane managala habba’ began with a huge fanfare of drums.  The Chief guests for the event were Dr. M. Ravi Shetty (Ex-President of Tulu Koota and Kannada Koota Qatar & Managing Director of ATS Company Qatar), guest of honor Dayanad G Katalsar (President of Karnataka Tulu Sahithya Academy) and Fr. Dominic Sequeira.

The reception area was a wonderful sight of the beautifully decorated entrance displaying temple, church and mosque as the center of attraction this year. The sublime beauty of the reception area cast a spell on the onlookers. Its highlighted Unity in Cultural diversity and the faith and belief of people of Tulunadu who are hardworking yet fun loving and joyful, and celebrate every occasion from a blooming of flower to a good harvest.

The audience and guests were welcomed by the comperes of the program Renita Mascarenhas and Paramanad Salian followed by National anthem. The significant mixing of soil of Attur Church, Kateel Temple and Ullal Darga on stage marked the opening of Tuluparba 2019, followed by traditional lighting of the lamp by the Chief Guest and Guest of honor along with President Ramesh S Bhandary, Advisory committee and Managing committee members. Tulu Parba 2019 Souvenir was beautifully released during the theme song of TKK ‘Sirimudi Singaro’ that was melodiously sung by Suresh Salian.

This was followed by the Felicitation program hosted by Dr. Preeti Shetty. TKK President Ramesh S Bhandary welcomed honorable guests Dr. Ravi Shetty and Dayanand G Kathalsar with flower bouquets. In his speech President reiterated the important role played by Tuluparba and Tulukoota Kuwait in connecting the children and adults to rich Tulunadu art and culture. He also highlighted the evolution of charity and philanthropic works of TKK during its 20 years journey and the significant contributions made my Tulukoota Kuwait in the 20th year where they explored new area of providing shelter to the needy under the “Ashraya yojana” and very strongly supported educational causes during the year. He also extended his warm greetings to the koota members and families on the auspicious occasion of Diwali.

Visiting artists Mr. Parmanand Salian, and Mr. Prasanna Shetty Bailur were also felicitated. Guest of honor Mr. Dayanand Kathalsar, President of Karnataka Tulu Sahithya Academy was felicitated for his services to Tulu Culture. Dr. M. Ravi Shetty Chief Guest of the event was also felicitated and honored during the ceremony. In his speech, he emphasized the importance of communal harmony.

Scholarship and certificates of appreciation for academic excellence were handed over to meritorious 10th and 12th standard kids of TKK members by His Excellency Mr. K Jeeva Sagar, Indian Ambassador to Kuwait and the TKK President Ramesh S Bhandary. The Ambassador congratulated the recipients and appreciated the work of TKK in bringing communities together as one family.  He also greeted the koota members on the auspicious occasion of Diwali.

The audience was left mesmerized by “Bhoomi Bechaand” act on stage that conveyed a strong message on the scenario of global warming and preserving nature. The act was conceptualized by Paramanad Salian Sasihithlu and directed by talented committee member Satisha Acharya. More than 100 talented TKK artists of all ages had performed and enthralled audience for almost 1 hour 10 mins and gave the message of our mother earth gets destroyed due to global warming and every human being should take precautions to protect our nature.  Mr. Satisha Acharya & dance choreographer of this concept Vidushi Shantala Satisha were honored with mementos for their fantastic work.

Another highlight of the day was the super hit drama ‘Buddi Chapat’ by Chaitanya Kalavidaru Udupi, created and directed by Prashamsa fame Prasanna Shetty Bailur, took the jam-packed audience in comedy world with its rib-tickling comedy and emotions. All the drama artists were honored with mementos by President and Management Committee Members. 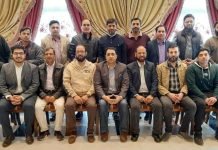 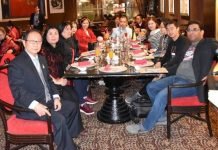